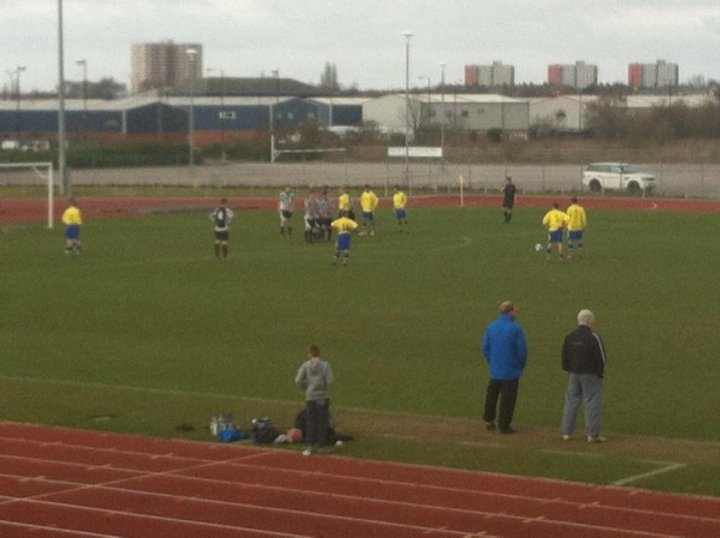 Title-hunting Treeton Terriers emphatically beat lowly Bawtry Town, scoring eight goals with only one in reply at the Keepmoat Stadium.

The visitors took the lead after just 15 seconds, with Tom Bartholomen beating the offside trap before chipping the goalkeeper.

It was 2-0 after 19 minutes; Luke Beedham with a powerful shot which goalkeeper, Luke Wilkinson, couldn’t keep out.

Seven minutes later Bawtry pulled one back; Peter Shirley’s corner was headed in by Jack Sutton.

Hayden Spencer then made it 3-1 following a neat one-two with Kurt Fitter. John Travis made it 4-1 before half-time, finding himself unmarked inside the penalty area.

It became 5-1 on the hour when Bartholomen poked into the goal from close range following Joel Askham’s corner.

On 67 minutes Treeton netted their sixth. Beedham cut inside onto his left foot and scored his second of the game.

With eleven minutes to go it became 7-1. Joel Askham shot from inside the area and it flew into the top right corner.

The scoring was complete one minute later, Beedham with his hat-trick. The striker beat the offside trap before firing the one-on-one beyond the goalkeeper to round off the 8-1 win.

The result today had a bearing on the top of the table and the bottom.

Bawtry kicked off the match but immediately squandered possession. Skipper Kane Doughty’s ball to Bartholomen saw the striker beat the offside trap before he chipped the goalkeeper sending the ball into the bottom left corner, giving the visitors the lead after just fifteen seconds. 1-0.

Bawtry’s defence regrouped temporarily. When Treeton’s Luke Beedham found the ball at his feet but his shot was blocked by an array of bodies.

The hosts then created a chance of their own; Marco Battaglia with a long range shot which was caught by Kyle Aldam.

Beedham’s next shot then flew high and wide. He then turned provider for Travis whose shot inside the area was gathered by the goalkeeper.

But then, in the ninetieth minute Bawtry were broken once more. Askham to Doughty to Beedham whose powerful effort was unable to be kept out by Wilkinson, nestling into the bottom left corner;2-0.

Bawtry almost hit back immediately; Battaglia’s free kick drifting over the crossbar. However they did find the net on the following attack. Shirley’s corner was met by Sutton’s towering header which flew into the top corner: 2-1.

Bartolomen then had two efforts in quick succession. The first of which was a long range shot which went just wide. Then, having received the ball from Spencer, a left footed shot which looked destined for the bottom corner was denied by Wilkinson’s acrobatics.

However in the 34th minute it became 3-1. Spencer to Fitter then returned inside the area resulted in a low finish into the right corner.

The fourth followed shortly after. Beedham at the byline passed to Travis who, unmarked, slotted into the bottom right; 4-1.

Bawtry’s Zach Allen then fired a long range shot, but it was deflected into the goalkeeper’s hands.

Treeton’s winning league run dated back to the 25th January and showed no sign of ending as the half-time whistle sounded.

The Terriers were certainly keen on demonstrating their capabilities and produced a second half performance to rival the first. Two minutes into the half Doughty played through Bartolomen, but the resulting one-on-one was kept out by Wilkinson.

Beedham was in fantastic form. On 54 minutes he bypassed two defenders on a run, before missing the target with the effort.

However Treeton soon had their fifth. Askham’s cornerwas flicked on by Connor Simpson and poked home by Bartolomen.

Travis then passed Simpson, but his thunderous low effort went wide of the right post.

With twenty-three minutes remaining Treeton netted the sixth. Travis’ low cross to Beedham who cut inside onto his left foot and he fired low into the right of the goal.

As the game neared its conclusion the visitors however still had time to add two further goals to their tally. Askham’s shot from inside the area glided into the top right corner to make it 7-1, before Beedham broke the offside trap and fired the ball into the net for the eighth, from the one-on-one.

The game presented further opportunities for additional goals. Beedham’s long range effort flew over the bar, before Doughty’s effort was ruled out for offside.

Bawtry striker Steve Wood will feel he could have done better from his own one-on-one as stoppage time loomed, but his chip drifted wide.

It is now back-to-back defeats for Bawtry Town who remain off the bottom due to Swinton not having a fixture.

 Weekly Round-up It has been a week defined by Cup Semi-Finals, but ended with league developments at the forefront of the mind.