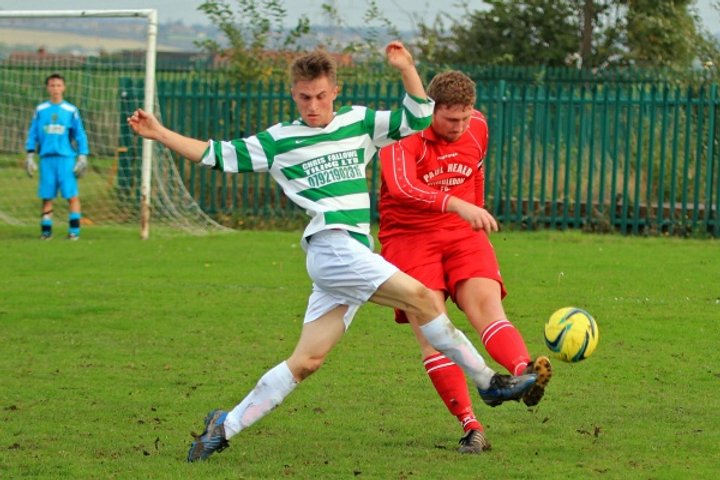 Davy FC Under 21’s recorded their first win over the season and ended a run of three consecutive defeats in emphatic style, beating Valley Knights 6-3 on Saturday.

Knights opened the scoring through a superb solo goal from Sam Round. The tricky winger cut inside from the left before weaving away from defender, Louis Fletcher and sliding the ball past the goalkeeper.

The hosts’ lead lasted for thirty minutes, but as the interval neared Davy fought back. To equalise, Sam Day found Adam McCarthy who cut inside from the right and shot across goal into the bottom left.

Buoyed by this, Davy didn’t take long to add a second to their tally. Day cut inside from the left and shot from just inside the box; goalkeeper Jake Baker got a hand to it but couldn’t keep it out.

From then on the visitors never looked back and made it three straight after the restart. Day’s free-kick from the left found McCarthy at the far post, the striker blasted his first effort against the crossbar, but he was able to head in the rebound for his second of the game. Five minutes later McCarthy netted his hat-trick, with an effort from inside the box.

On sixty minutes, Knights reduced the deficit back to two. James Saunders’ free-kick deflected in off the wall. However, Davy pulled further away four minutes later with Nathan Wood’s cross from the right tucked in by Sam Day, making it 5-2.

Wood finished from Day’s cross to make it 6-2, before Valley Knights netted a consolation goal from the penalty spot through Adam Gwilliam with 6-3 the final score.

The win lifts Davy to 7th in the Under 21 division, despite having played fewer games than those above them in the table.

Knights started the game brightly. Lee Calvert’s corner found its way to Adam Gwilliam whose overhead kick was cleared off the line. Five minutes later, Round netted in the host’s opener following a superb solo run.

Round looked motivated throughout and was the architect of the next attack. The winger sprinted beyond right-back Elliott Trundler before cutting inside, but was denied by goalkeeper Josh Bunting’s legs. Round was close to netting again when he got on the end of Gwilliam’s cross but, unmarked, he was unable to hit the target.

Gwilliam then found himself, albeit someway from goal, one-on-one with Bunting but a miskick meant the ball spun out for a goal-kick.

Still Knights had chances. Ben Haywood’s long throw was almost poked in by Luke Knowles at the far post, but the Davy defence held firm.

With squandered chances and the lead only at one, Davy were resilient. Sam Day’s shot from a tight angle flew wide, before McCarthy netted the equaliser, with Day providing the assist.

Day then gave his side the lead with a shot from the edge of the box, which was too powerful for goalkeeper Jake Baker.

Davy kicked on during the second half. Day’s free kick found McCarthy at the far post; first the woodwork denied him, but the headed rebound made it 3-1.

Sam Day was close again with a free-kick close to the half-way line which went just over the bar. At the opposite end of the field, Jordan Watson crossed for Round, whose shot was parried by the goalkeeper. Before two minutes later McCarthy grabbed his hat-trick with a placed finish for 4-1.

McCarthy’s flick on then found substitute Demetrious Kiwamya, but his left-footed shot was cleared off the line by Round.

Knights made it 4-2 with James Saunders’ deflected free-kick, and they came close to reducing the deficit to just one but Gwilliam sent his one-on-one wide. It was 5-2 through Day’s penalty box finish after Wood’s cross from the right.

Jordan Watson cut inside from the right which forced Josh Bunting into a save as the visitors refused to wither. From the resulting corner, Daniel Shaw rushed a shot which flew over the crossbar.

Tom Fewkes’ long-range lob for Davy glided over, before with ten minutes to go Wood headed in Davy’s sixth.

Joseph Secker fouled Watson for a penalty awarded to Valley Knights, which was calmly sent into the bottom right corner by Gwilliam. The goalkeeper dived in the correct direction, but the penalty was perfectly placed.

The immediate aftermath of the spot-kick involved clashes between both sets of players. However referee, Mr Gough, was quick on the scene and Davy held on for victory for the final five minutes.