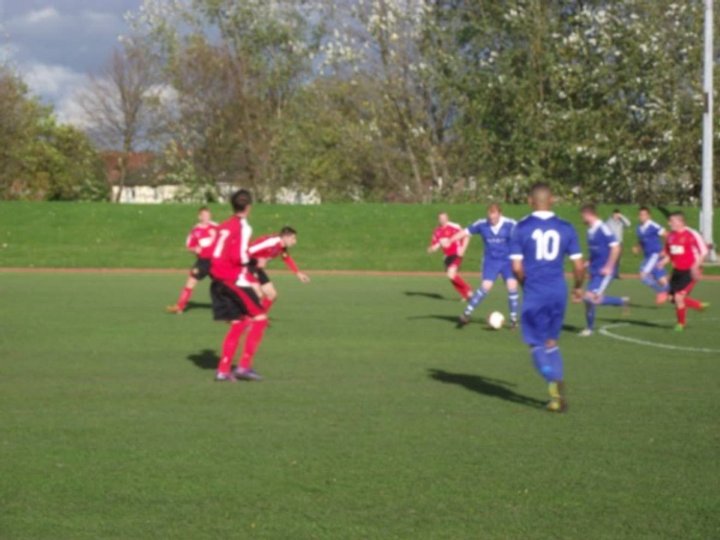 Rotherham Town moved into second place in Division One with a 3-1 victory over Sheffield Athletic, their sixth win in seven games in all competitions.

Town took the lead on the half-hour mark. A Rotherham corner was weakly cleared and soon ended up at Mike Parkinson’s feet in the box; his turn and shot nestled into the bottom left corner.

Their lead was doubled from the penalty spot early in the second half. Steve Jefferies attempted to weave inside the area from the left, but captain Paul Robertson stuck out a leg and was adjudged to bring down the Number 8. Carl Marriott took the resulting spot kick and stroked the ball into the bottom left corner as goalkeeper, Daryle Johnson, dived the wrong way.

The third goal of the game was the pick of the goals. Town’s Steve Andrews spectacular long-range half-volley whistled into the right corner, unstoppable for Johnson.

Athletic were able to pull a goal back five minutes from full time. Andrew Lee’s cross was tapped in by Lewis Chergle. But the Sheffield side were condemned to their fourth defeat in five league games, dropping to twelfth in the table.

With windy conditions restricting passing football in the early stages, few clear-cut chances were created. Jamie Hewit’s long range shot for Sheffield and Rich Williams’ effort for Rotherham going over the bar were the only opportunities in the first fifteen minutes.

Marriott almost gave the hosts a surprise lead with an effort from the right of the penalty area; his distant attempt going just above the crossbar.

At the opposite end of the field, Nidza Luwe shot wide of the left post.

In the twenty-fourth minute Rotherham’s Kingsley Little produced a beautiful cross towards Rich Williams, but the striker couldn’t quite make contact and the ball fell just wide.

Still Rotherham continued to press; Marcus Squires’ free-kick found Parkinson but the header was caught by the goalkeeper. But on his team’s next attack at goal Parkinson found the back of the net, with a turn and shot in a crowded penalty area.

Sheffield were far from being outplayed however and created openings which came close to drawing an equaliser. Firstly, Andrew Lee chipped into the box and Luwe headed wide and a few minutes later Lewis Chergle’s low shot inside the area was claimed by the goalkeeper.

On the stroke of half-time Sheffield’s Anthony Marshal’s shot from inside the box drifted wide. Prior to this Daryle Johnson was forced to deny Liam Johnson’s long range effort and Marriott’s free-kick.

The second half immediately began with incident. Paul Robertson conceded a penalty when Steve Jefferies fell to the ground, the Sheffield captain however was convinced no contact was made. Carl Marriott successfully dispatched from the spot.

Rotherham had the ball in the net for a third time but Liam Johnson was ruled out for offside after latching on to Rich Williams’ through ball.

The relief of this decision had a temporary positive affect on the Sheffield attack and soon after they created their best chance thus far. Anthony Marshal’s corner was met by Robertson, but his bullet header fell just wide. A minute later Robertson’s head met another set piece, this time a free-kick, but was denied by Rotherham’s Chris Noye.

The best save of the match belonged to Johnson however; Steve Jeffries left-footed shot looked destined for the bottom corner if not for his reflexes.

But Steve Andrews’ stunning goal which spurred from the resulting corner beat Johnson and all-but-ended hope of an Athletic comeback. Although they soon grabbed a consolation through Chergle’s tap-in.

Still Sheffield refused to surrender and Marshal’s half-volley stung the palms of Noye.

Meanwhile Rotherham mustered chances of their own. Liam Johnson went beyond Marshal on a run into the box but Daryle Johnson saved with his fingertips at the far post; which limited the defeat to 3-1.