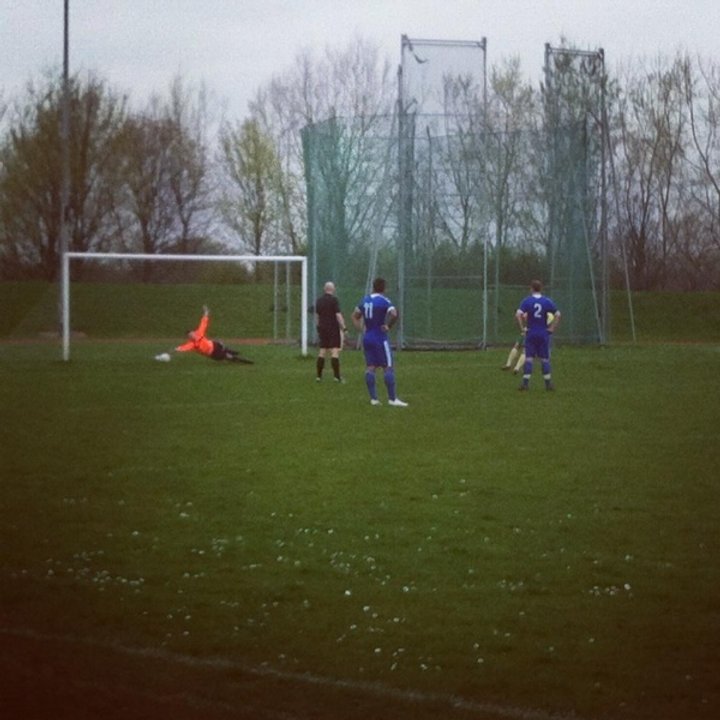 It took until the 62nd minute until the visitors opened the scoring. James Claxton was sliced down in the penalty area and Matthew Langley dispatched from the spot.

Four minutes later the lead was doubled; Luke Shiel with the tremendous long range effort, which flew into the bottom corner.

On 72 minutes it became 3-0. Benjamin Thornton played through one-on-one and slotted calmly into the bottom left of the net.

The rout was sealed with fourteen minutes remaining; Claxton sent through with only the goalkeeper to beat and did so with a low shot to the goalkeeper’s right.

Despite the win, Wickersley’s hopes of a league title were ended due to wins for Joker FC and Jubilee Sports. However they will be playing in the County Senior League Premier Division next season after already achieving promotion by beating Sheffield Bankers in midweek.

Rotherham Town started the match brightly. Gareth Thompson’s shot from inside the area drifted wide of the right post.

At first the hosts dictated possession with the visitors looking to break on the counter. Sheil’s corner for the visitors, created the first meaningful chance of the match, with Shane Young heading high and wide of the left post.

The visitors slowly began to exert more pressure. Sheil’s free header after Langley’s cross cleared off the line on 21 minutes. Thirty seconds later they had another chance, Matthew Claxton’s turn and shot requiring Jamie Housley to deny with his fingertips.

Langley’s corner was then temporarily cleared but fell to Andrew Rawlin, but the first-time volley fell wide of the left post.

Perhaps the turning point came when Rotherham lost Steve Andrews to a knee injury. Having dominated possession to this point, Wickersley began taking the emphasis in dictating the play.

However Rotherham had the first chance after this incident, Rich Williams turning inside from the right flank, but sending the shot high and wide.

At the other end, goalkeeper Jamie Housley was dispossessed by James Claxton, however his positioning was top class to turn the resulting chipped effort wide of the post.

He had another chance straight after with a towering header from Langley’s cross, kept out by the crossbar.

Langley’s powerful effort from the edge of the box, on 35 minutes was then sent wide of the right post.

Rawlin’s strong run then saw him bypass three players before sending through Jack Jordan, who sent the one-on-one from a tight angle into the side netting.

Langley then sent through Claxton, one-on-one, but sent the shot wide, when it was looking as if they were never going to take advantage of any opportunity.

Wickersley were on an unbeaten run dating back to the 28th December 2013, whilst Rotherham Town had suffered two consecutive defeats.

The first shot on target of the second half went the way of the visitors, Claxton making a run with the ball at his feet into the box, but sending a tame effort at the goalkeeper. This happened before Benjamin Thornton’s long range shot flew over the bar.

Then, Jordan Turner played through Claxton who turned inside from the right within the box but was cyclically tripped. Langley stepped up to take the resulting spot kick and sent it neatly into the corner.

The lead was doubled from the next attack; Sheil’s long range blast into the bottom corner; unstoppable for Housley.

Thornton made it three when he was played through on the right side of the penalty box and slotted calmly across the goalkeeper into the far corner.

With Town on the backfoot, Wickersley created chances at will. Rawlin found himself one-on-one but his low effort was parried by Housley.

Fifteen minutes from time the scoring was completed. Rotherham appealed for offside as Claxton was played through, but the striker ignored the critics as he found the bottom corner.

Shane Young’s low free-kick for Wickersley then was kept out by Housley and Rawlin’s effort went over the crossbar.

Rawlin then passed low Thornton, but the shot was cleared off the line.

Still Wickersley pressed and Alex Elwell forced a spectacular save from the goalkeeper with a powerful shot from inside the area, being tipped over the crossbar. Elwell’s second and final chance of the game saw a long range effort go wide of the right post.

To conclude the action Jefferies free-kick was met by Mike Parkinson, but the goalkeeper gathered the shot.

In the league standards, Rotherham Town remain sixth where they started the day; a similar situation to Wickersley who stay third.