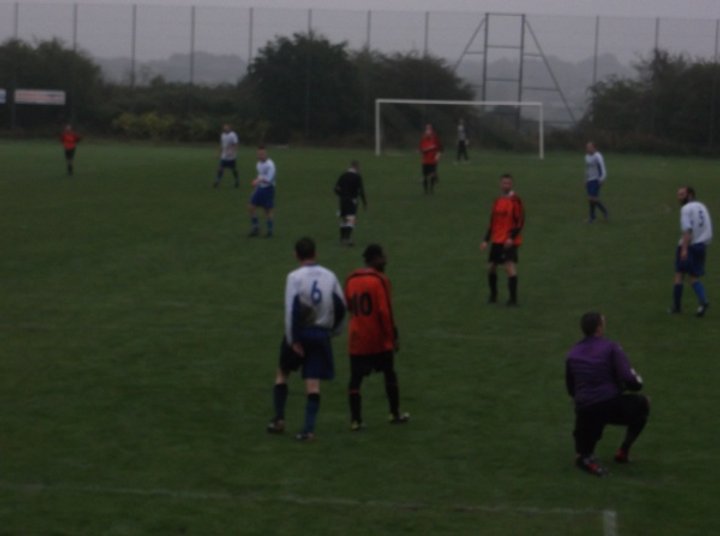 There were just two league games in the County Senior League this weekend, but that was only a appetiser in a busy cup week.

Division Two
Both of those two league fixtures took place in Division Two. The big game was between Frecheville Reserves and Worsbrough Bridge Athletic Reserves at Frecheville Club Ground. Both teams have had a poor start to the season, with only two wins between them both thus far. Frecheville’s first win of the season came last week and lifted them off the foot of the table.

Frecheville Reserves started very well in the driving rain, going into the half-time break 3-0 up. Jamie Hopkins scored the first goal for Frecheville, when he stabbed in from close range following a set-piece. Nick Garvey then took centre stage. He scored twice before the break, once with a sharp left-footed strike and later following a lightning fast counter-attack. Garvey (No: 10 in picture) completed his hat-trick in the second-half finishing off a Matt Hunter cross. Frecheville went on to win the game 6-1, with Steve Brammer and Matt Hunter also on the score-sheet as Frecheville made it back-to-back victories for the first time this season.

Elsewhere, North Gawber Colliery reinforced their hold on second place with an impressive 5-1 away win over Bawtry Town at the Keepmoat Stadium. North Gawber are in fantastic form with six consecutive league wins to their name, and are now only four points behind league leaders Kingstone United.

S&HCFA Senior Cup 2nd Round
There were a number of midweek games in the Senior Cup involving County Senior teams. Houghton Main take the headlines though. They were 6-1 winners over AFC Emley of the Northern Counties East League Division One. Houghton Main forward Ashley Vickers had an excellent night scoring four times.

The good news did not stop there for the County Senior League, with Handsworth also defeating a team from the North Counties East league. They were 2-1 winners away to Nostell Miners Welfare, who currently reside in the Premier Division of the NCEFL.

Thomas Fletcher scored a last minute winner for Oughtibridge, as they beat Hallam FC 3-2 in an exciting game at Sandygate. Daniel Robinson and Strachan Sampson were also on the score-sheet for Oughtibridge on a memorable night for them.

Wednesday night was not as kind to the county Senior League though. At the Memorial Ground, Penistone Church were beaten 4-0 by Sheffield FC. On the same night Millmoor Juniors were beaten 6-2 by Athersley Recreation at Sheerien Park.

Swinton Athletic won their second game of the campaign, with a 1-0 win over Frecheville at Mexborough Athletic Ground. Their only previous win this season, also came at home to Frecheville in mid-September.

Everest made revenge on their 2-1 home league defeat to Ecclesfield Red Rose at the beginning of the season, by knocking them out of the cup on Saturday. They were 3-1 winners at the Civil Service Ground.

S&HCFA Rosehill Association Cup 1st Round
The highlight in the Rosehill cup came at the Welfare Ground, where Millmoor Juniors Reserves were 7-5 winners over AFC Emley Reserves. Grant Allott was the star on the day, scoring three times for Millmoor.

Sheffield Athletic were in put behind them their recent poor league form to beat Crofton Sports at Warminster Road. The score was 2-2 after 90 minutes, but Sheffield finished the job in extra-time, winning 4-2.

Tim Council and Joe Baldwin were on target for Penistone Church Reserves, as they beat Staveley Miners Welfare at the Memorial Ground.

Rich Williams scored twice to inspire Rotherham Town to a 5-3 away win over Hepworth United. Mike Parkinson, Ben Liddle and Liam Johnson were also on target for Rotherham.

Philip Coulthard was the hero for Joker FC. Coulthard scored a hat-trick as the Joker beat New Bohemians 5-0 at Ruby Cook Playing Fields.

Athersley Recreation Reserves were back to winning ways, with a 4-0 away win over Sheffield FC Reserves.

Sheffield Lane Top of Division Two shocked Davy FC of Division One, beating them 6-1 at the Civil Service Ground.

Kingstone United are in formidable form at the moment, and have won every game they have played thus far this season. They extended this record on Saturday, as they saw-off Hemsworth Miners Welfare 3-1 at Barnsley Sports College.

Elsewhere, Sheffield Bankers of Division One, were beaten heavily 5-1 by Rossington Main Reserves. Silstone United were unlucky, as they fell to a 2-1 away loss to Shepley. The all County Senior affair at Rockingham Community Centre between Thorpe Hesley and AFC Dronfield fell 3-2 in Thorpe Hesley’s favour.

North Gawber Colliery U21 continued their perfect start to the season, with an impressive 6-1 away win over Jubilee Sports Over 35’s. Shaw Lane Aqua Force Barnsley U21 also maintained their 100% start, beating HSBC Bank Over 35’s at Shaw Lane.

Treeton Terriers U21 lost their first game of the season. They were narrowly beaten 1-0 by Skelmanthorpe.

Adam Gilliam scored a hat-trick for Valley Knight U21, as they beat Railway Berry Brow. The win is Valley Knights third-in-a-row.

Houghton Main eased into the 2nd Round, as they were impressive 7-0 winners away at Woodhouse West End.

There was more woe for Swinton Athletic U21, as they fell to their fifth defeat in as many games. They were narrowly beaten 2-1 by Brinsworth Whitehills.

Swallownest Miners Welfare U21 lost their second game in-a-row, as they beaten 5-0 away against Upperthong SC.