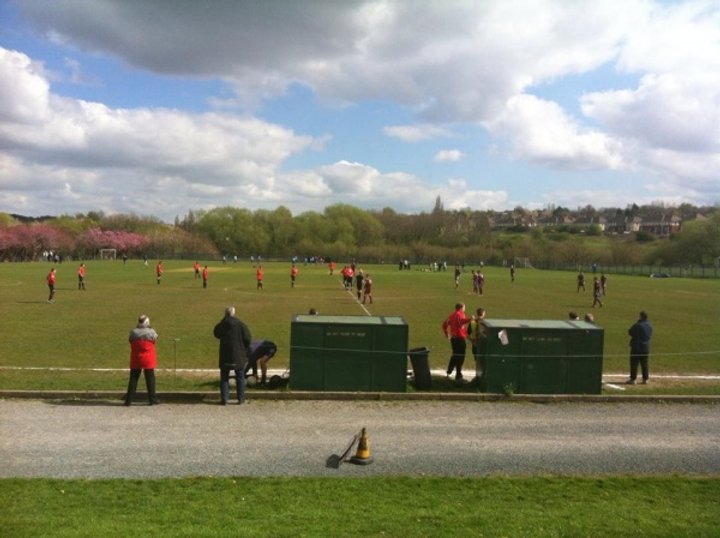 On 18 minutes, the hosts almost broke the deadlock. Brad Clarke passed to Josh Bedell in some neat build-up play before Billy Bradshaw’s thunderbolt effort from close to the penalty spot cannoned back off the crossbar.

Just after the half hour mark they did take the lead. Dylan Parrott played an exceptional cross-field ball in to Clarke, based on the right hand side of the box, who struck a fantastic half-volley into the top left corner of the goal.

On the next attack the lead was doubled. Hayden Goddard’s cross to Clarke was met by a strong header. It certainly hit the bar and may well have crossed the line too, but Andy Ogden poked the rebound home from close range just to be sure.

With twenty one minutes to go the scoring was completed. Parrott’s shot was speculative to say the least and it curled magnificently into the top right; unstoppable for goalkeeper Cameron Sandgeson.

Worsbrough’s fourth consecutive defeat has subsequently ended any hope of a top half finish as they dropped one place to ninth in the league table.

The first opportunity of the match arrived in the fifth minute, Clarke’s low cross found Alex Thompson just inside the penalty area, however the resulting shot fell wide of the right post.

Much of the match was a balanced affair with the hosts most clinical. One such opportunity wasted from Worsbrough was that of Tom Peace. A long ball from defence found the stretching centre forward, but contact on the half-volley was poor and the shot drifted wide.

Then, the Green Lane End crossbar was called into life. Billy Bradshaw hit a powerful effort which rebounded via the woodwork. Ogden’s follow up was parried by the goalkeeper.

Luke Exley’s long range effort for Athletic was not too far wide of goal at the opposite end of the field.

Defensive discipline was responsible for keeping the score-line at 0-0 when the ball broke to Ogden in the area. Worsbrough closed the striker down quickly and the rushed shot could only be sent wide.

Still the hosts were looking the more threatening in the final third. Parrott’s pass to Ogden was subsequently backhealed back to Parrott, but it was thumped over the bar.

In a contrasting, less patient tactic, Exley exerted another long range shot, this time going wide of the left post.

They were left to rue it. Within two minutes a ball from Parrott on the half-way line by the left touchline, found Clarke who rocketed into the top corner.

In a blink of an eye one became two. Goddard’s cross to Clarke whose header bounced off the underside of the crossbar, dropping on the line and Ogden tapped in from a yard out.

The match was largely a midfield battle with very few clear goalscoring opportunities.

In the second half, Bridge were again restricted to shots from distance; Jack Jones sending the latest of which over the bar.

Then Dylan Parrott received the ball on the left wing and struck on almighty shot from range which Sandgeson stood no chance with as it flew into the corner.

Worsbrough registered their first shot on target with fourteen minutes remaining. Danny Foster’s free-kick was met by the head of Jed Phillips, which the goalkeeper, Luke Harriott, held.

Phillips took a free-kick himself five minutes later but this time Harriott was untroubled.

With three minutes remaining, Mark Fitzpatrick hit a powerful shot from inside the area which the goalkeeper held.

The final chance of the match Clarke crossed to Ogden, who held the ball up, before setting up Parrott but the shot went high and wide.

Victory was Sheffield Lane Top’s eleventh of the season. They conclude the campaign with a match against Bramley Sunnyside on Wednesday; a fixture that Worsbrough will have an eye on with the visitors capable of finishing above today’s defeated.