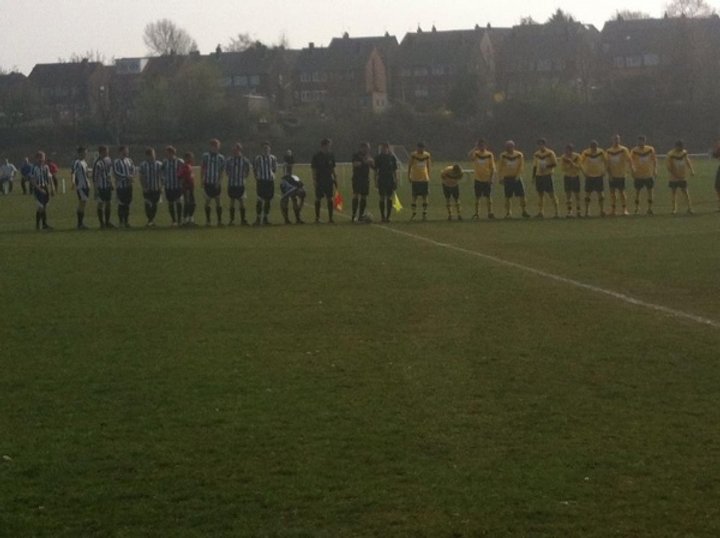 South Yorkshire Amateur Football League champions Byron House breezed into the final of the Junior Challenge Cup with a 3-1 victory over Treeton Terriers.

The visitors took the lead in the 9th minute in controversial circumstances. Jordan Marshall’s corner was headed in by Michael Appleyard. Originally the goal was disallowed for a foul on goalkeeper Kyle Aldam, however the referee then reversed the decision, adjudging Aldam’s injury to be caused by a fellow Treeton player.

Shortly after, Andrew Dodds came close to doubling Byron House’s lead with a powerful 30-yard strike; the goalkeeper was well beaten but to his relief it cannoned the post and ran to safety.

Seven minutes after the opener, another corner lead to their second goal; Scott Stapes with a spectacular overhead kick which flew into the bottom left corner.

Andrew Saynor netted the third and final Byron House goal on 27 minutes. Another corner from the left was met by Saynor in the form of a bicycle kick and deflected beyond the goalkeeper.

Treeton improved during the second half but the damage was already done. However the hosts did net a consolation goal in the third minute of stoppage time. Luke Beedham’s cross was followed by an effort by Tom Bartolemen, which was blocked by a Byron defender; the ball then fell kindly to Kane Doughty who volleyed beautifully into the top corner. 3-1 the final score.

Byron House will face Sheffield FC Over 35’s in the final, who overcame Sheffield Medics, 3-2, in the other semi-final.

Byron House looked convincing from the start. Shaun Higginbottom’s cross was met by a towering Saynor, though it sailed over the crossbar.

Daniel Nelson then played through Marshall who cut inside before sending the resulting shot high and wide.

Nelson’s shot from the edge of the area then troubled Aldam, who was required to make a neat fingertip save.

But Byron were soon in front through Appleyard’s header. The injury sustained by Aldam consequently saw the goalkeeper substituted, though it was unclear who made the infringement. The referee first disallowed the goal before making a U-turn whilst Aldam was grounded.

In the 13th minute, House almost grabbed a second; however Dodds’ long range effort was blocked by the woodwork.

Still the away side pressed, Saynor’s shot from distance looked destined for the top corner if not for the substitute goalkeeper’s acrobatics.

It became 2-0 following a corner, Scott Stapes getting the final touch from Dodds’ corner.

Nelson may have felt he should have made it three. He was played through one-on-one, took the ball onto his left, but sent the low shot into the side netting.

Saynor’s bicycle kick then made it three from a corner caused from his own long-range shot being tipped over. Nelson’s low shot was then denied by the goalkeeper’s legs.

Treeton created a rare first half opportunity five minutes prior to the interval. Connor Simpson received the ball from John Travis’ cross, but the low shot was wide of the right post.

Jordan Marshall’s header for Byron House went wide to conclude a first half dominated by the away side.

Byron House are unfamiliar to losing, with just one defeat in the South Yorkshire Amateur League this season and still have a chance of further silverwear in the League Cup.

Terriers performance improved dramatically in the second half and it was them who had the first chance after the break when Simpson headed over from Dec Pinhorn’s corner.

Byron’s Ben Sargeant sent a free-kick straight at the keeper, before Marshall’s header forced the opposition keeper into a fantastic save at the opposite end of the field.

Travis then passed to Bartolemen who was denied by Birtles’ legs. Simpson’s shot then drifted wide.

The Terriers finally got on the scoresheet with the final shot of the game. Beedham’s cross was met by Bartolemen, however the attacker’s effort was blocked by a defender, but the rebound fell kindly to Doughty who volleyed in to make it 3-1.

Treeton now have to pick themselves up for their remaining league games, but need to win all of their remaining four games to beat Swallownest Miners Welfare to the County Senior League Under 21 Division title.

Weekly Round-up  Penistone make the Cup Final, only one of the top 6 win in the Premier Division, North Gawber march-on